“I am like one who wore his brick to show the world how was his home.”

Often I was asked this question: how do I see myself as an artist? My answer has always been the same: I consider myself an immigrant worker. My job is to consider what it is to be an artist, when he feels different from in his own cultural context, even in his own role.

With this necessity, this permanent need to think of exile, the project of the Exile Pavilion was born, as a traveling project, offering a parallel cartography, a free geography of temporary exhibitions, with stops in different countries.

The project raises the question of the exile as a new space to be reinvented, to be rethought and finally to be invested. He wants to question both the global and specific links between various forms of displacement, whether the migrant worker’s situation, the expatriate, the refugee or the exile of war, natural disasters, economical problems, and political or racial persecutions.The Exile Pavilion wants to invest and cross all boundaries, revisiting the experiences of the exile and reactivate the traces in history. Where does the exile begin and where does it end?

Are we all equal against the displacement and exile? And from who are we exiles?The Exile Pavilion does not exist as an architectural building even if the proposal is made for architects to imagine. But it is the works of artists, visual artists, musicians, poets, writers, performers they are exiles or their work deals with the displacement, which build together this protean and nomadic pavilion. Its journey will make layovers at artistic structures, institutions, ephemeral places, in the form of exhibitions, publications and meetings. At each stop, the works and archival materials are redesigned according to the place and its history.

You will be directed to Artists' Page
ReturnConfirm
Notes

The only hope that is left, I shall put it in a bottle.
From exile I made glasses to see
There are no more trees…
The departure has no image
Publications 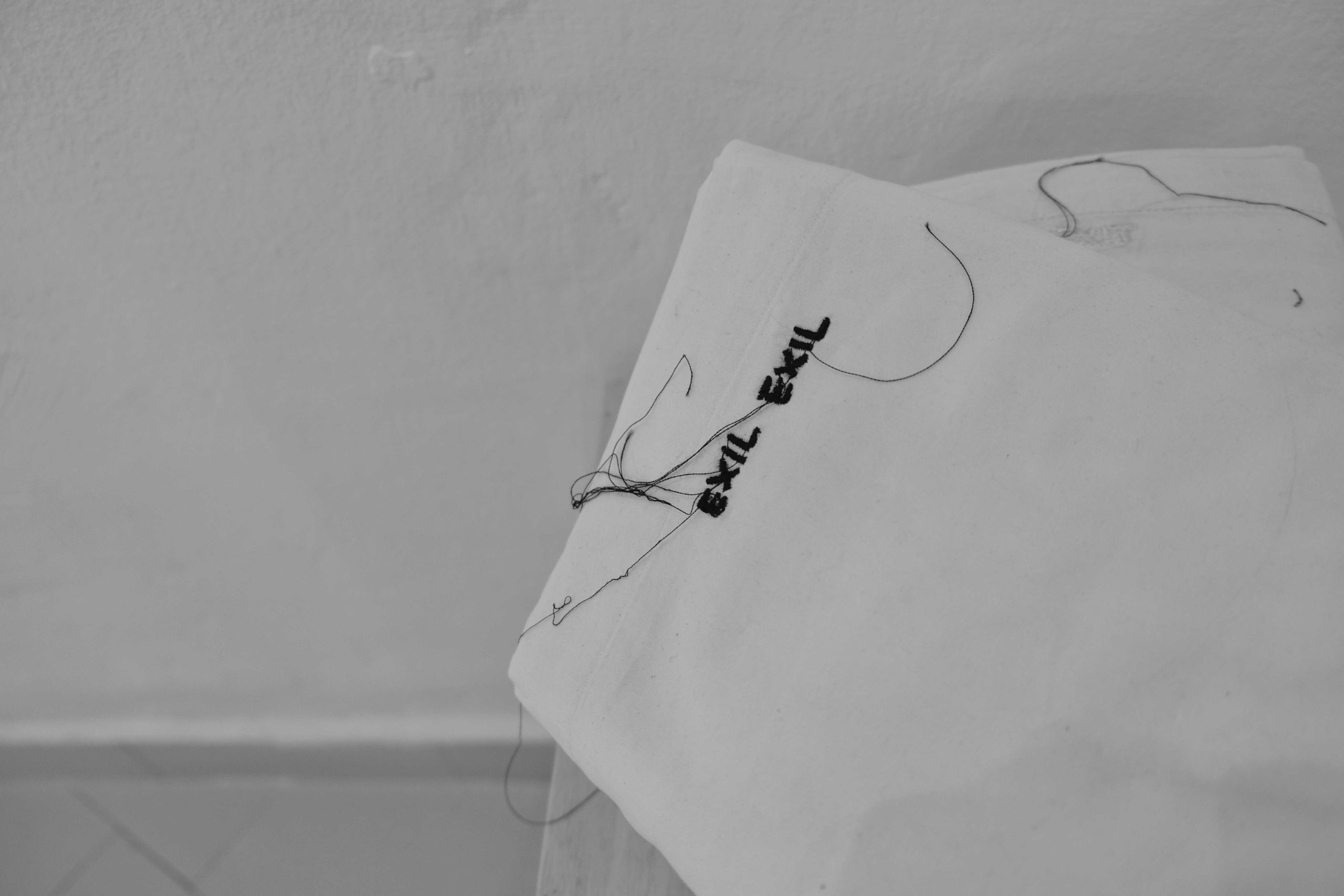 The work presented here is part of a group of installations entitled “Draw me an Exile”. Exile, exile or rather Exile exit is a simple and poetic piece, just a few words embroidered onto cotton sheets. The white sheet has multiple significations that complete and some- times oppose each other. It can be an evocation of domesticity, a house, one’s bed, a protective “home”. Sleep, says the artist, the fact of locking oneself in a room, is an act of exile, the fact of falling asleep is an act of exile, a form of interior exile. But the artist also tells us that this is an item for traveling, of anonymous bedding, hotel rooms… The sheet and the blanket are the first things that are given to a refugee, “a shield against the nudity into which an impossible life has forced him”, she writes. These sheets can also be the ones in which lifeless bodies are placed, shrouds – “sheets for the ultimate rest” – for those who didn’t get to the end of the journey, exit. A shroud that, in Islamic tradition, is made of three white sheets, like here.

Born in 1972 in Al Hoceima, Jamila Lamrani lives and works in Rabat. Jamila Lamarani graduated from The Fine Arts School of Tétouan, in 1998 and is one the founding members of Collectif212. The artist likes to vary techniques that support her work but space remains her favored tool. She constructs it with from a fragile architecture made from dark fabrics evocative of the secret recesses of memory, she builds infinite layers of shadow and light that are just as fissured with openings to the dream world. In her recent installations, drawers are used, enclosing the memories of hope filled bygone lives. The distance imposed by her installations, with a mazes of stretched string that resemble bars and suggest both a chosen and subjected imprisonment of the individual within a society traversed by ambiguities and tensions. She has participated in numerous solo and group exhibitions in Morocco and abroad, including the Dakar Biennial of Contemporary Art, in Senegal in 2002. In November 2008, during the exhibition Casa Arab de Madrid, Collectif212 Arte contemporaneo en Marrueccos, she installed Mémoire 1, with 6 other members of the Collectif212. In 2010, she created the second part of the installation, Mémoire 2, in the art space Le Cube Independent Art Room in Rabat, and installed, the same year, Fabric of memory, at the SANAA Gallery in Utrecht, Netherlands. In 2013, she participated in the project Au-délà de mes rêves, at the Royal Monastery of Brou and at H2M, in Bourg-en-Bresse, in collaboration with the Lyon Biennial. In 2014, she took part in the exhibition Identities, at the Institute of Islamic Cultures, in Paris. At present her work can be seen at the Photography and Visual Arts Museum, in an exhibition entitled Trace of the future.